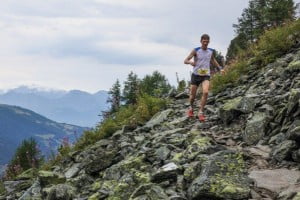 International Trail Running Superstar heads for the Garden Route next month to challenge the “Grail of Trails ® ”mythical four hour barrier. The Otter African Trail Run, presented by Salomon and GU, is taking place next month in the Tsitsikamma Section of the Garden Route National Park. 450 runners will line up at the Stormsriver Restcamp to run the full distance of the famous 5 day OTTER Hiking Day in one day only.

Swiss mountain marathon man Marc Lauenstein is the latest big name set to test his herculean climbing abilities against Africa’s toughest marathon distance trail run the Otter African Trail Run. The confirmed participation of Lauenstein’, a world champion in two sports, has sparked debate on the races fabled four hour barrier being broken. Welshman Ricky Lightfoot, who following his 2013 record shattering win of 4:15:21, further shocked the South African Trail fraternity with his assertion that the Otter could indeed be run even faster and that a sub-four hour Otter was indeed possible. ‘’ With the right runners on the right day, yes, I think it can be done,” said the Welsh fireman to a stunned silence at the Otter awards ceremony.

Could Salomon sponsored Lauenstein be that right runner? Race director Mark Collins thinks not, not in his first year anyway, and he has the most riding on it. One Hundred Thousand Rand to be exact. If the Swiss runner does go sub-four hours Collins will be an unbudgeted six figures poorer, but the Race Director thinks his money is safe for now. “It would take a superhuman effort on a perfect day for someone who knows the course well to even get close to that mark,” said Collins. “To run this course unseen like he (Lauenstein) will, not likely, even for him.”

Lauenstein is in superb form following his domination of the celebrated Mont Blanc marathon last month and he will be hard for the assembled pack of South African Elites to contain should he decide cut loose on the course dubbed by local runners as “the Grail of Trail ® .” While Lightfoot currently holds the men’s record for the Otter Run Classic (East West) and most pundits believe that it is possible that the Swiss hero could well shave some time off that.

Other gurus are not so sure that he won’t go even one better than that. Double Black Medal winner in the Otter AJ Calitz has always believed that the one person on the planet who can do a sub-four is the Catalan anomaly Kilian Jornet. Calitz should know having seen Kilian up close in brutal contest in the Pyrenees. “Kilian has the highest VO2max ever measured and the man has got skills.” Calitz believes that the Catalan could indeed run that mythical four hour mark very close. When Lauenstein himself squared up against Jornet in the Alps over the marathon distance he only slipped three minutes to the Catalan, “He is definitely in the same class.” “I’m glad it’s not my money on the table,” says the bearded South African Trail Runner. “Collins is in for a nerve-racking four hours!!”
Another former winner of the Otter Dr Andre Gie backs Collins though. “His money is not at risk just yet. “ “The Otter is a different beast to all other trail races. It took many years for us to figure out the formula to run fast.” “The Otter is about finding a rhythm along a route that has no sections to cruise and seems designed to break your rhythm at every corner, very different to the smooth trails of the Alps where you can find your groove.”

Word of the fabled toughness of the Otter doesn’t deter the Swiss Champion though. “The tougher the better,” he says. Money is the last thing that motivates the mountain runner though whose main motivation in racing the Otter is just being in this beautiful part of the world. He insists that his hero will be the oldest person to finish the Otter. One way or another, the cat has been set among the pigeons, or the Otters in this case, and all eyes will be on that famous floating finish line come Saturday the 17th.