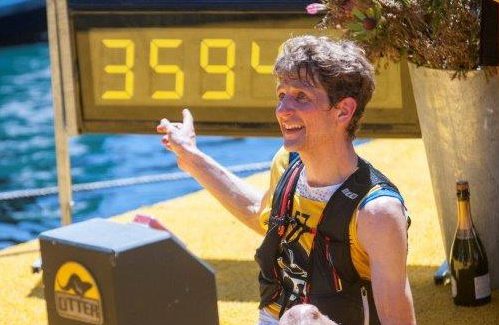 Lutraphobia – the fear of Otters

In the long jump event at the 1968 Summer Olympics, Bob Beamon jumped so far he created a new word. “Beamonesque” entered sporting lexicon and is now used as an adjective to describe spectacular athletic feats. Out of nowhere Beamon produced the jump of the century. In an event that measures gains in tiny increments he broke the world record by 55 centimetres, jumping almost out of the long jump pit. The defending Olympic Champion at the time said to Beamon, “you have destroyed the event”.

It is a relative term. A dropping of the time in the marathon from, say, 2:03 to 2:02, is spectacular on all sorts of levels but it is not beamonesque. It is a result of inching out human limits bit by bit, courtesy of training, pacing, technology, diet, rest, weather, and the tiny little things that make a difference [and making sure your shoes don’t fall apart – hey, Eliud! ] So the opportunities to do something truly beamonesque are non-existent. Or so I thought.
When I heard Marc Lauenstein’s winning time for this year’s Otter I thought I was going deaf. How much? How much? I checked and rechecked and rechecked my checking and then tweeted. “That’s not on another level; that’s on another planet.” Consider these two people: Ricky Lightfoot and Kane Reilly.

Ricky Lightfoot is not my gran. He is a world class, globally respected, sponsored athlete. His 4:15 course record was on the bleeding edge of what (we thought) is possible. That record has just been bettered by 16 minutes!
Kane Reilly is not my gran either. He is a top-of-the-heap class act and is recognised as one of the best trail runners around. He proved that fact by winning the Prologue. The time he ran in this year’s Otter would have won three of the previous events overall. He was beaten by 34 minutes! Hey? You run your heart out in the toughest trail race in the country, arrive at the finish in 2ndplace, and hear that the winner got there 34 minutes earlier? If you want to play with numbers for the hell of it, and extrapolate Marc’s performance to the Comrades, the record would have been beaten by 30 mins and the second place runner would have been beaten by an hour.

It’s easy to get sidetracked by Marc’s performance and forget about the women’s race. It was awesome. It was an excellent idea to start the top men and women together. Three women runners dicing the whole way, the lead swapping several times, and all three finishing in the top 10. Had Landi Greyling and Kerry-Ann Marshall been there too, the women’s race would have been spectacular. Looking at the finishing times it is certainly possible to come to the conclusion that the top 12 could have included 5 women. If anyone, still, has any doubt what beasts women are on very tough races, these numbers should change your mind: The top three women on the Prologue were in 20/21/22 position; on the race those same three women were 7/8/10. In terms of relative prologue-to-race performance they were miles and miles better than anyone else. It’s a clear message to those bothered by these things: if you don’t like getting ‘chicked’, make sure the race is no longer than 3 kms!

But back to Marc. I find it extremely suspicious, sinister even, that such an incredible performance just happened to be produced by a Swiss runner, who just happens to come from the country which produces Toblerone, which just happens to have the same profile as the Otter route. Coincidence? I think not.

Conspiracy theories aside: why was Marc so dominant? Yes, he brought with him a formidable mountain running CV but what I find more interesting is his orienteering background. If I were an orienteering administrator I would be jumping up and down with excitement at the advertising that money can’t buy. Marc brought with him lashes and lashes of orienteering experience at the highest level. In Europe, unlike here, orienteering has cult status and tens of thousands of spectators watch the major events. At any World Cup there are cowbells, klaxons, viking helmets, screaming fans and, at the very centre of it all, the finest athletes around. Marc describes himself as a ‘former’ elite orienteer and that word ‘former’ should give you chills. Imagine if there are faster Marcs out there? There’s that scene in Jaws where the dude says, “you’re going to need a bigger boat”; well the Otter version of that is Mark Collins saying, “you’re going to need a different colour ribbon.”

All of the top orienteers have speed that would make a track athlete happy. They can run sub 15 mins 5000’s and some can run sub 14 mins. They can -and do – convert to competitive x-country without missing a beat. But the hidden gem in orienteering is ‘pace’. The mantra ‘run too fast and you run too slow’ is ingrained. If you cannot think clearly, and translate your thoughts into actions, your pace it wrong. How many of us actively engage our brains when we run? If any of us do, it is certainly not on the level of an orienteering event where a brain is as important as arms and legs. Could Marc’s ability to think clearly while extremely fatigued have made a difference between a 3:59 and, say, a 4:02?

Anyway, 2015 Otter is over and history is made. The races were won by a dentist and biochemist. What do we read into that? This: if you ever want to win the Otter you must do your homework and brush your teeth.