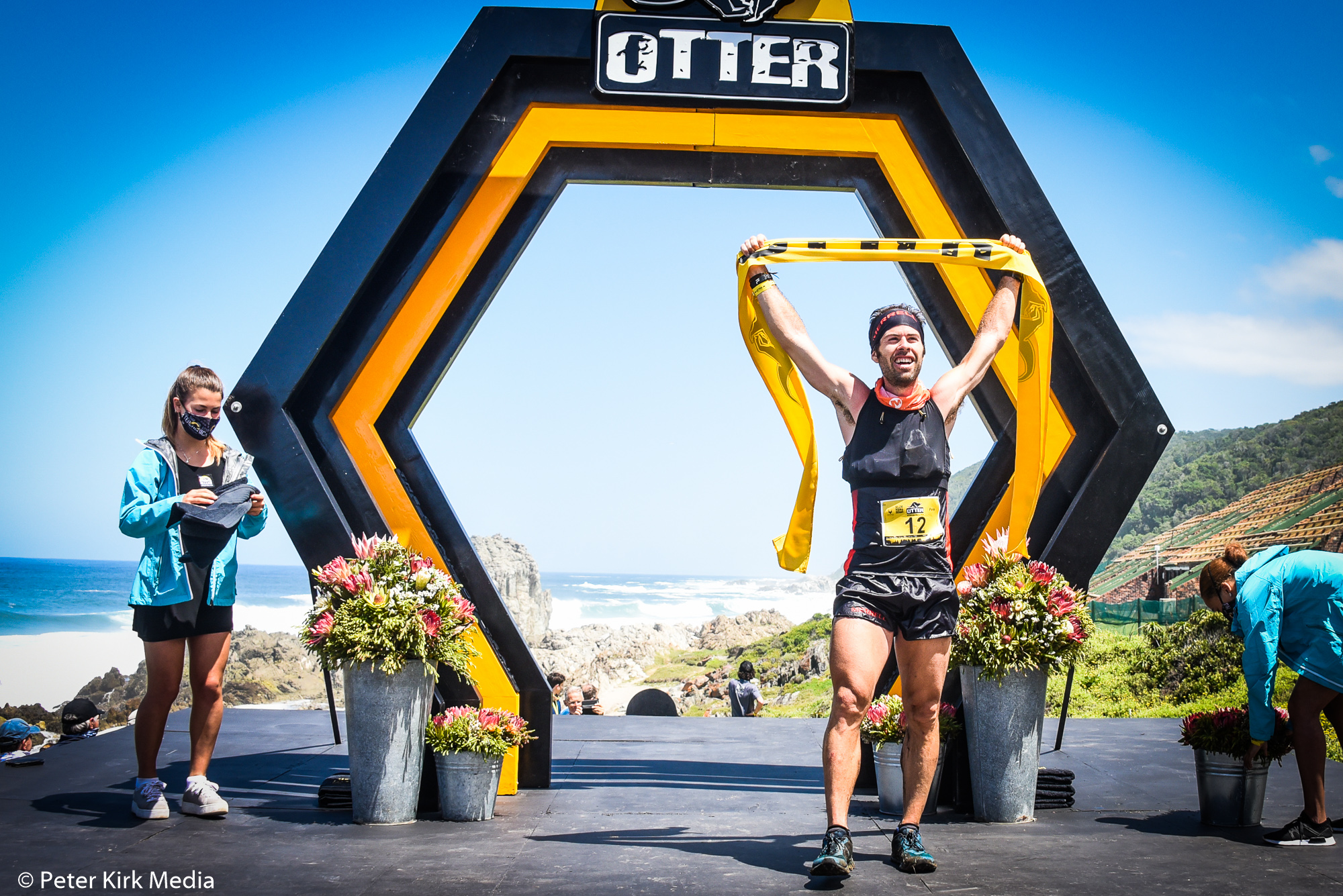 In the unlikeliest of years due to the global pandemic that swept across the world, shutting down economies and pressing pause on all events, the team at Magnetic South together with SANParks are incredibly proud to have hosted this year’s African Otter Trail Race. “When the pandemic hit South Africa our beloved country, no one thought that we would ever utter the word African Otter Trail in 2020,” said Grant Grootboom, the Hospitality Service Manager Tsitsikamma Section of Garden Route National Park. “Following stringent COVID-19 protocols, thinking out of the box and pulling together to make this event a reality certainly wasn’t easy but, with such capable event organisers who respect the laws of this country, the regulations of COVID-19 and SANParks regulations – it made the planning process and the approval process so much easier,” he said.

Clear skies, spring low tides and calm conditions made for near perfect trail running at the start of this year’s Otter Race, starting in Nature’s Valley and following the gruelling and challenging Otter Trail from West to East to the finish in Storm’s River some 42km later. The Abangeni, which is the elite starting batch determined by Prologue times run the day before the Race, was made up predominantly of South Africa’s top elites with the addition of Spanish skyrunners Pere Aurell and Ragna Debats and took off on Saturday morning 31 October 2020.

In the men’s race, a small group broke away from the rest of the pack early in first 10km, led out by Kane Reilly with Johardt Van Heerden close on his heels. With them, Rory Scheffer, Siviwe Nkombi, Pere Aurell and Daniel Classens maintained the pace. By the infamous Bloukrans Crossing, the group had stretched, with Reilly and Van Heerden breaking ahead, leaving Scheffer and Nkombi together ahead of Aurell and Claasens who had fallen into stride. Despite the large swell, Bloukrans was shallow and manageable, making for a relatively quick crossing. Things up front remained unchanged at the halfway point at Oakhurst, except unbeknown to the leaders, Aurell was starting to making his move on the pack.

In a post-race interview, Aurell mentioned he was aware that the first half of the route was fast, but got increasingly more technical in the second half and towards the finish, which is his preferred terrain. His strategy was to start conservatively and save energy for the second half where he knew his strengths could come into play providing he had some fuel left in the tank. In the second half Aurell ran negative splits to reel in over a 6minute gap between himself and the leaders, picking off his competition one at a time. Every time he felt tired he simply relied on the beautiful Otter trail for inspiration. “It is a very beautiful trail, especially the ocean views. Every time I felt tired, or needed energy I would look around me and it gave me strength.”

He first made his way onto the podium by passing Kane Reilly who dropped back to second place around the 30km mark, and made his final move just two kilometres from the finish, passing Van Heerden on an especially technical boulder section. “I was suffering, but I knew I had to win after I passed him (Van Heerden). Van Heerden didn’t give up easily however, and put in a fight to the finish line, finishing in view of Aurell as he took the title in a time of 04:03:30. Van Heerden finished a mere 20 seconds behind in second place in a new south African RETTO record of 04:03:50. Kane Reilly maintained third place and finished in a time of 04:11:07.

In the Women’s Race, it was last year’s winner and one of this year’s favourites, Toni McCann that took the lead early on. “I went out with the goal of racing myself, and not worrying too much about what everyone else was going to be doing and it meant that I went out harder than everyone really expected because no one really ran with me. I felt comfortable with my race and am happy with how it unfolded.” Despite Spanish-Dutch Ragna Debats and Bianca Tarboton applying pressure, McCann extended her lead to over 13minutes over the 42km course, proving not only her advantageous knowledge of the trail, but her immense prowess and skill. While she didn’t break the Women’s RETTO record as she hoped, she did break her own from 2018, setting the fastest South African Women’s time by finishing in a time of 04:40:30. “I really wanted to prove to myself that I could run as fast, if not faster than I had done two years ago and that it wasn’t’ just a fluke. When you are racing people of that calibre (2018 race) you do end up pushing yourself harder than maybe you think you do, so to be able to do that and replicate that performance and do better in a setting that isn’t as high pressure is really good and shows progression. It shows that two years of hard work has paid off.”

Second and third position was rivalled until the final third of the route where Tarboton pushed ahead increasing the gap between her and third place, Debats, securing her second place finish on the podium in a final time of 04:53:01. Ragna Debats ran consistently, enjoying the South Africa experience and trail despite feeling undertrained, and finished third in a time of 05:06:59, incidentally also the first VET home.

While things certainly felt a little different with the strict COVID-19 safety protocols in place, it didn’t detract from the fact that this year’s performances were world class to say the least, despite the sub-four barrier not being broken by a South African yet. “Two new South African RETTO records, a near-sprint finish in the Men’s race and a successful, positive event despite restrictions, no participants and social distancing,” said Race Director Mark Collins.

For many locals it was the first opportunity to race again this year, and the community together with the Otter organisers, SANParks and all other partners worked together to be compliant, but to also maximise the four day celebration of trail running. “Just to be out there, running with people again was so, so special. I am just so happy to be in this space again,” said an elated Toni McCann.

The challenges and strain COVID-19 placed on everybody involved was certainly a change from previous years, but being reminded of the core reason behind putting on an event of this nature is how the team at Magnetic South persevered and overcame all obstacles. “Trail runners, of which I include myself, draw this inherent and profound pleasure from racing against each other and ourselves in nature, and to be able to do that, here on the most incredible trail in one of the strangest years is an absolute privilege,” said Collins. “ We are incredibly thankful for our strong relationship with SANParks, and hope that we have honoured our commitments with them this year to host a safe, responsible event.”

From a compliance point of view, SANParks were satisfied with how the event played out. “SANParks want to thank Magnetic South for the marvelous work that they have done during this very difficult time of COVID-19 pandemic by adhering to all necessary protocols and implementing some of the best COVID protocols we have ever seen. It was absolutely a great honour to be part of  and we look forward to engaging with Magnetic South again in future and we know that the Otter Trail Run will still take place for many, many years to come,” said Grootboom. “We want to thank the participants, the men and women who have trained so vigorously for something that shouldn’t have even happened in a time like this and for their patience and for being conservationists in their own rights. Thank you Magnetic South and we wish you well for the planning of the next African Otter Trail of 2021.”

Please contact Bryony McCormick for any media queries related to the Otter.