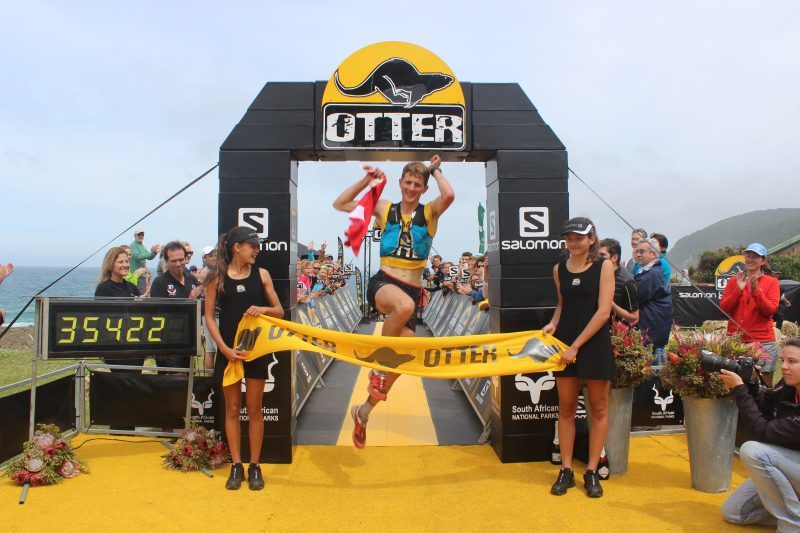 The Otter Trail is one of South Africa’s most pristine and popular 5 day hiking trails, traversing the coast between Storms River and Natures Valley on the Garden Route. Once a year, Magnetic South puts on a bucket list race as South Africa’s elite trail runners welcome a few international counterparts to race this relentlessly technical 42km route in 8 hours or less.

It was another Retto year, the Otter in reverse. On Friday 14 October participants took part in a 4.8km prologue in order to be seeded for the following day’s race. This seeding system enables a staggered start, getting all the runners on to the single track without compromising on safety and without any bottle necks. It also allows the top 24 men and top 12 women (The Abangeni or Challengers Group) to head out first. This group competes for overall podium positions.

On Saturday 15 October as the first rays of light hit the unspoiled beach in Nature’s Valley, a stellar line up of athletes gathered on the sand, ready for the start chute. Magnetic South has worked tirelessly since the race’s inception to bring the best in marathon distance trail runners to their event, and this year they could not have dreamed up a better list of names to take part in a doozy of a battle in perfect weather.

In the men’s race, international Salomon athlete Marc Lauenstein flew in from Switzerland to attempt a sub 4-hour record on the Retto route. Local Salomon athlete Kane Reilly came back in fierce form and fellow team mate Christiaan Greyling was more than ready to give it his racing best. Thabang Madiba took the fastest time in the prologue, and was all set for a great race, with youngsters Chris Strydom (Stellenbosch) and Rory Scheffer (Cape Town) alongside more experienced trail blazers Pedro Calderon and Mvuyisi Gcogco expected to set a cracking pace at the sharp end.

But as race director Mark Collins rightly pointed out during race briefing, the women’s race would be down to the wire. With a line-up that included an Olympic athlete, the winner of the recent Sanlam Cape Town Marathon and international legend Stevie Kremer, things were going to get hot, quickly. In a sad turn of events, one of the race favourites, Kerry-Ann Marshall, injured her knee during the prologue and had to withdraw.

With a combination of fynbos-lined single track, rocky coastal sections, pebbled beaches, slippery forest paths, relentless trail stairs, slippery river crossings and nearly 2500m ascent over the Marathon distance course, there is little room for error if speed is the objective. There is just one aid station, the “GU Munchie Point” at the halfway mark. Runners carry their own fuel and water, along with mandatory trail gear.

The Bloukrans River Mouth presents itself at around 14km in to the run. This year the low rains resulted in minimal swimming and a quick and easy crossing. The first three men through this point included Kane, Marc and Thabang, seconds apart. They remained in this formation until Oakhurst hut, close to half way. From here in, Thabang’s race unravelled. Christiaan Greyling moved swiftly in to third position, humbly admitting on the finish line that he didn’t see Kane at all during the race, and “Wasn’t entirely sure who he was racing upfront, or how far away his opponents were.”

The top three ladies passed halfway with US Stevie Kremer in a marginal lead, closely followed by Robyn Owen (Kime) and Nicolette Griffioen.
In the end, Marc Lauenstein once again wowed the crowd gathered at the Storms River Campsite as he took top spot in another unbelievable time of 3 hours 54 minutes and 22 seconds, scooping up the R100 000 sub-4 hour incentive cash prize booty as he did so. He was followed by Kane Reilly in a new South African record of 4 hours 17 minutes and 22 seconds. Christiaan Greyling followed suit, also finishing below the previous South African record in a time of 4 hours 19 minutes and 40 seconds Young gun Rory Scheffer caused a stir coming in 4th at just 21 years of age. Word is, this is a trail runner to watch.

The ladies did not leave the crowd waiting for long. Robyn Owen (Kime) set a new course record of 4 hours 49 minutes and 45 seconds. She was followed by Stevie Kremer in 4 hours 52 minutes and 26 seconds. Nicolette Griffioen rounded off the podium in 5 hours and 18 seconds. Of the Otter 2016 top 10, four were women.
As the podium dust settled, the restless crowd had one question, “Where is Thabang?” A formidable trail runner with accolades such as former SA Long Distance Trail Running champion to his name, and a third spot holder on the Otter 2015 podium, it became clear that something had gone wrong for Thabang. 6 hours 55 minutes and 56 seconds after hitting the beach with his fellow competitors, Thabang arrived on the finish line to a warm welcome and much cheering. In a post-race interview Thabang admitted to having enjoyed a 20 minute nap during the second half of the race, but he was not about to pull out despite feeling dreadful and being way off his race strategy.

The Otter is always going to be a melting pot of formidable talent in a setting that leaves participants as breathless as running over the relentless technical terrain. Win or lose, records or a mid-run recess, heroes are born on the single track between Natures Valley and Storms River Mouth.