He may have arrived a bit more bloodied and muddied this time, but he once again arrived first. Salomon mountain athlete Kilian Jornet held off another formidable field of challengers to win the Ring of Steall Skyrace in the Scottish Highlands in course record time on Saturday to cap a perfect Golden Trail Series in which he won all three races he entered.

Up and down the soggy, slippery green landscape of the glens, the Catalan led from the front this time, holding off a persistent Nadir Maguet of Italy to win by one minute and 31 seconds, in 3:04:34. Defending champion Stian Angermund-Vik (Team Salomon) of Norway cartwheeled across the line (purposely) in 3rd in a time of 3:09:05. Alexis Sevennec of France was 4th and Switzerland’s Pascal Egli was 5th. Bartlomiej Przedwojweski, Remi Bonnet, Marc Lauenstein, Sebastian Batchelor and Jan Margarit rounded out the top-10.

After winning at both the Marathon du Mont Blanc and Sierre-Zinal, Jornet needed only to start the Ring of Steall in order to qualify for the Golden Trail Series Grand Finale at the Otter Trail in South Africa next month. As if often the case, however, Jornet finished what he started, though it wasn’t easy.

“Nadir and I were pushing each other on the downhills and we ran together almost all of the race,” said Jornet, who bloodied his chin during a crash-landing in the last few kilometers. “I managed to get a little bit of a lead in the last uphill and held on during the downhill. It was a great fight between us and with Stian charging up from behind.”

In the women’s race, Sweden’s Tove Alexandersson broke the course record by winning in 3:46:28, besting a pair of Brits—Victoria Wilkinson and Holly Page—who ran well to finish 2nd and 3rd, respectively. Sheila Aviles Castano and Laure Orgue were 4th and 5th. For the 26-year-old Alexandersson it was just her second ever skyrace, and she has now won both of them.

The Ring of Steall was the fifth and final race of the season-long Golden Trail Series and represented the last chance for many to grab a spot inside the top-10 and qualify for all-expense paid trip to the Grand Finale in South Africa. That left plenty of drama to unfold in Scotland, especially on the women’s side, where the final few spots were up for grabs.

After missing his beloved Zegama Mountain Marathon in May due to a broken leg he suffered in a ski-mo race last winter, Jornet returned at Chamonix with onlookers wondering about his form. He won there going away and, aside from a DNF after suffering an allergic reaction to a bee sting at the Ultra-Trail du Mont Blanc (UTMB), he has remained untouchable ever since.

“It has been a great season for me coming back from my injury. It has been just perfect,” he said on Saturday. “You need to be rested to run well and for sure resting due to the injury was a good thing coming into the season, but resting boring. And now I’m looking forward to South Africa. It should be a great battle.”

To excel in the wet conditions, Jornet wore the Salomon S/LAB XA Amphibian Shoes and a full Salomon race kit of S/LAB Modular apparel. Tomorrow, he plans to toe the starting line for the final race of the weekend in Kinlochleven, the dangerous and technical Glen Coe Skyline, which fuses mountain running and alpinism. 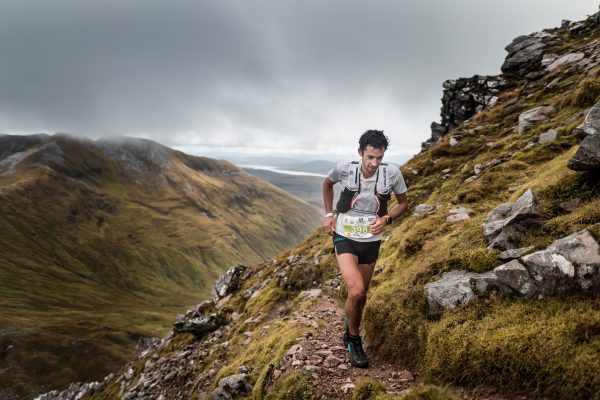