Greyling and MacKenzie win at the 2017 Otter African Trail Run 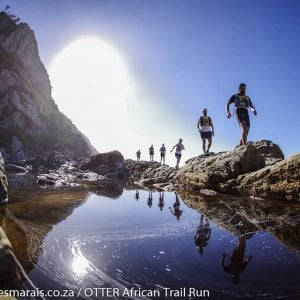 Sunny skies and a cool ocean breeze welcomed 234 trail runners to the start of the 2017 Otter African Trail Run at Storms River on 28 October. The Abangeni AKA the Challengers, a group decided by the fastest 24 men and eight female prologue times, took off at 07:00, followed by the rest of the field in smaller groups of four at 30 second intervals.
At the start the route favours technical runners, and Kane Reilly used the opportunity to gain as much of a lead as possible, putting around 8min between him and second place mChristiaan Greyling by Oakhurst, roughly 20km into the race.

Similarly, in the women’s race, Robyn Owen took off from the start, her skill and speed apparent as she moved swiftly over the technical terrain. Meg MacKenzie stayed close on her heels, using Owen’s agility to motivate her forwards. “We agreed that we would push each other to get the possible best results out of each other, so I used her speedy rock skills to pull me along and tried to catch her,” said Mackenzie. Carla Van Huyssteen fell into pace several minutes behind MacKenzie and Owen.

In the men’s race, it was looking like a sub-4 win for Reilly, but word from the course confirmed that Greyling, who was looking strong, had gained 2min on Reilly at the top of Bloukrans, and another 30sec on the swim across. On top of that, wildcard Robert Rorich, with his flowing locks and Onitsuka Tiger sneakers, popped up at Bloukrans just minutes behind Greyling. With less than 10km to go, the race was still wide open.
By the time the women reached the timing point at Bloukrans, MacKenzie had taken over the lead and had 4min on Owen. Van Huyssteen, who suffered a rolled ankle, dropped back off the pace, but was still hanging onto third place. Reports confirmed that Owen was looking strong, so like the men’s race, it wasn’t over yet.

Word from marshals on the route confirmed that Greyling made his move at Andre Hut and had passed Reilly. “It was an absolute surprise to see Kane, it’s like seeing a snake on the
course, you kind of see it but you don’t know what to do.” Despite Reilly putting in a fight, it was Greyling who crossed the floating bridge and finish line first, winning the 2017 Otter
African Trail Run in a total time of 04:13:15, with Reilly finishing behind him in a time of 04:24:59. “It’s my biggest win, definitely, it’s just such a special day for me,” said Greyling.
Wildcard Robert Rorich finished in third place in a total time of 4:27:05, just 2min behind Reilly. “It was a brutally fought race between South African contestants,” said Race Director Mark
Collins, who hasn’t seen a trail runner gain as much time as Greyling did in years. At kit check after the race Reilly discovered that he has lost his windbreaker during the Bloukrans crossing
and was penalised 10min, according to race rules. This resulted in Rorich moving up to second place, and Reilly staying on the podium in third.

MacKenzie’s race went accordingly to plan, and finally after three attempts at Otter, she charged across the floating bridge as first lady home in a time of 05:01:05 and incidentally
finishing seventh overall. “It means absolutely everything to win the Otter. This is my fourth try and it’s just been such a big long goal for the last five years. To finally achieve something
that I’ve pretty much worked for five years for is a very emotional and awesome experience.

I’m super stoked and over the moon,” said an elated Mackenzie. Defending champion Owen came in 8min later in a time of 05:09:18, entertaining the crowds with a cartwheel on the
balance beam at the finish in typical ‘Robyn-style’. Van Huyssteen pushed through her discomfort to hang onto the third spot on the podium and finished in a total time of
05:34:50.

It’s not all about the racing however, and all the finishers pushed their bodies to their limits on what has fondly become dubbed, the Grail of Trail. The Bayport “otterly mad” balance beam, that was strategically placed meters before the finish line, was an absolute crowd pleaser and as the day drew on and weary runners attempted to balance across it, so the crowd of spectators
grew. The afternoon ended at the sounding of the eight-hour cut-off bell, to the loud cheers of the enthusiastic crowd encouraging the final runners over the finish line. Like all races,
there were upsets and surprises, but overall, another magical year for South Africa’s toughest trail.