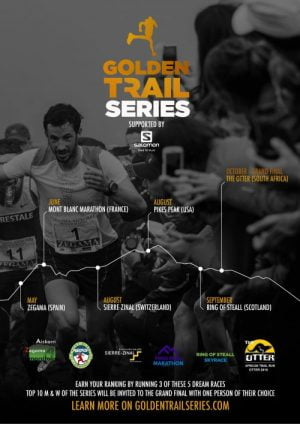 THE GOLDEN TRAIL SERIES IS PROUD TO ANNOUNCE THE LIST OF
INCREDIBLE ATHLETES CONFIRMED TO TAKE PART IN THE SERIES
THAT’S ALREADY BEING HAILED AS A GROUNDBREAKING SUCCESS AND
A REVOLUTION IN THE WORLD OF ELITE TRAIL RUNNING. 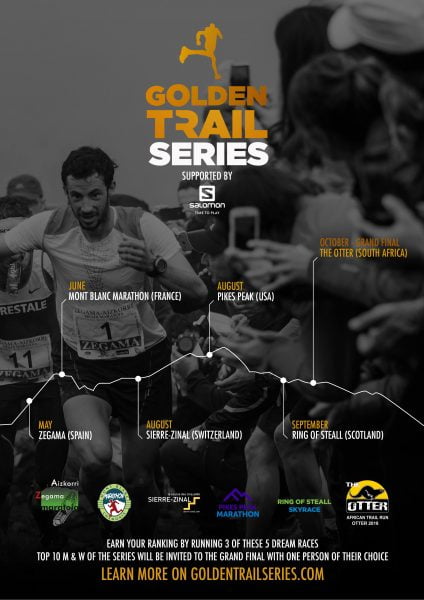 The unique formula of the Golden Trail Series has managed to attract, for the first time, the best
runners in the world who view this series as a ‘dream tour’ of competitive races. Mountain running and
Skyrunning World Champions – past and present, legends, speedsters and the best of the best are
confirmed to battle it out.
“I’m super excited about the Golden Trail Series because it just takes the best ever races – the races
that everybody wants to do – and puts them together,” said Salomon athlete Kilian Jornet, regarded
by many as the world’s best all-around trail runner and endurance athlete. “I’m excited about that
because the level will be huge. The best runners are already in these races so the level of competition
will be amazing. Each race is so unique too – like Zegama with the ambiance, Sierre-Zinal is just so fast,
Pikes Peak has the history of being like the third marathon ever in the US and Ring of Steall has the
amazing landscapes and technical sections. Every race is something crazy. Then it’s also really cool to
have the last race at Otter Trail in South Africa with the solidarity project. We’ll be there all together,
not racing only for the selfishness of winning a race but for something that can help other people.”

The Golden Trails Series brings together the most prestigious and legendary short-distance trail
races—Zegama in Spain, The Mont Blanc Marathon in Chamonix, Sierre-Zinal in Switzerland, Pikes
Peak Marathon in the USA and The Ring of Steall Skyrace in Scotland. To compete for the overall
classification and participate in the Grand Final, it will be necessary to participate in three of the five
races. This guarantees that the elites meet several times and ensures the deepest and most
competitive starting lineups in each race. The overall TOP-10 after the five races will be invited – with a
person of their choice – to the Grand Final, the Otter Trail in South Africa.

Each race is unique, offering a specific type of challenge, meaning that the advantage and the favorites
for each race will change depending on the runners’ strengths. The races offer climbing, descending,
flat and technical terrain. Ultimately, however, it’s the most versatile runner on any type of terrain that
will win the overall classification.

A SERIES EQUALLY EXCITING FOR MEDIA – AN OPPORTUNITY TO SHARE
AN ORIGINAL STORY
These legendary races are already the events that attract the largest audiences on social media.
Journalists from the international print media will be present at each race in the series to tell the entire
running community, sharing every moment and every step of the champion’s race. Millions of people
around the world are set to follow each competition.

EQUALITY AND UNPRECEDENTED PRIZE MONEY
The desire of the series is to offer equality to all these exceptional athletes by offering race prize
money of the same value, 1000 €, to each of the first five men and women at each race. Furthermore,
the TOP 10 men and women in the overall rankings will receive €5,000 if they take part in the final,
which they will be invited to with a person of their choice. An eight-day dream trip to South Africa, the
venue of the grand final that will decide the best and celebrate the sport.

WITH SPECTACULAR REWARDS, A UNIQUE ETHICAL POSITION
With exceptional bonuses comes exceptional conditions. At each race, the top 10 men and women in
the overall rankings will have to participate in the toughest anti-doping program that exists in the
world of sport today. A blood test will be asked of these athletes one month before the race and also
one day before the race to be able to compare variations. Race bonuses will be awarded to athletes
once the results of the podium anti-doping tests are known. But the most radical change is certainly
the refusal of TUEs based on corticosteroids during the entire series. Therefore, the competition
between the athletes will be as honest as possible and doubts about the performance of each can be
lifted. Trail running is still a “clean” sport, a model to follow and preserve.

A FINAL HUMANITARIAN GOAL
Since the top five are awarded so well during the whole season, the Grand Final bonus will go to the
humanitarian cause of the athlete’s choice *. The first five men and women will each receive €1000
towards their cause. In addition to these bonuses, the community can also put money into a “common
pot” which will be shared equally between the 20 associations/causes chosen by the 20 elites invited to
the final. Athletes will not be running only for themselves, meaning a new vision and altered approach
to the sport.

THE GOLDEN TRAIL SERIES SUPPORTED BY SALOMON
SALOMON, a French brand, born in Annecy in 1947, has always worked for the evolution and the
promotion of the sport, historically with skiing, then, more recently with the Trail. Salomon Running
prioritizes its relationships with its athletes and race organizers, two major pillars of the sport.
“Every sport has various elements that lead the way – brands, athletes, race organisers, community and
the media – and if everyone’s goals are the same and there’s a mutual respect the sport can evolve
faster and we can go very far. So we discussed the series with each of them before launching, and
that’s certainly a factor to it being so strongly supported”
– Gregory Vollet, Sports Marketing Manager at Salomon.

The most represented nation is USA with a delegation of 16 athletes.
All continents are represented
70 ELITE athletes have registered to take part in the overall ranking

THIS SERIES WAS CREATED TO PROMOTE THE BEST TRAIL RUNNERS IN THE WORLD,
TO HIGHLIGHT THE INCREDIBLE AND PASSIONATE FANS WHO ARE AN ESSENTIAL
INGREDIENT OF THIS SPORT AND TO SHOWCASE THE NATURAL SETTINGS AND THE
GRANDIOSE ENVIRONMENTS IN WHICH THESE EXCEPTIONAL RACES WILL TAKE
PLACE.
For more information www.goldentrailseries.com