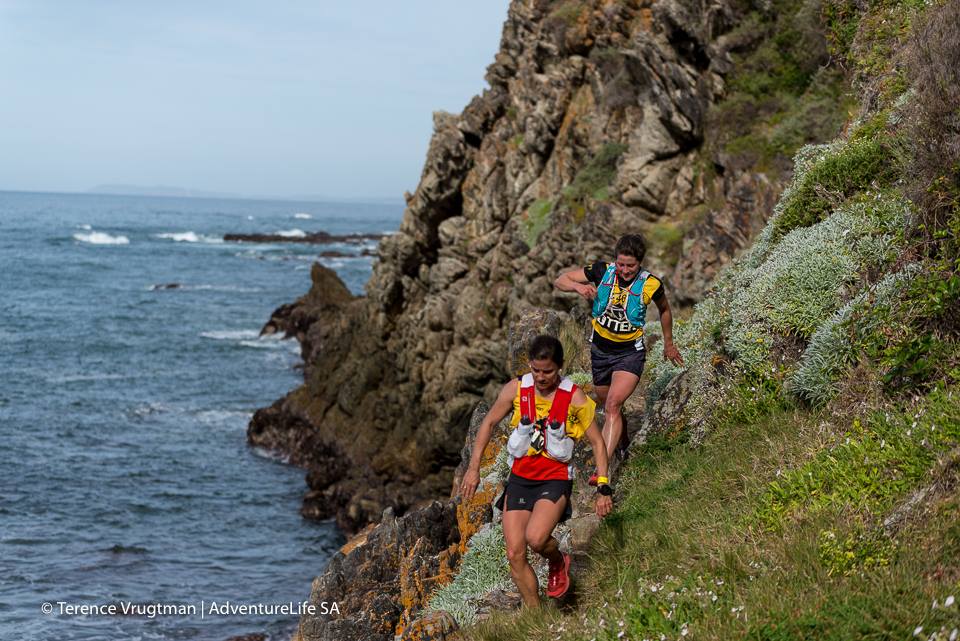 36 year old Marc Lauenstein, did the unthinkable when he raced to a second successive record-breaking win at the Otter African Trail Retto Run over 42km of coastal paradise yesterday in ideal cool, dry conditions between Nature’s Valley and Storms River.

And once again the amiable Swiss dentist walked away with a R100 000 incentive for clocking under the magical four hour barrier, stopping the clocks at 3 hrs 54 min 22 sec, to win the race by 23 minutes over Cape Town’s trail dynamo, Kane Reilly.

Reilly also finished inside Iain Don-Wauchope’s Retto course record of 4:21:30, clocking an excellent 4:17:24 while Stellenbosch trail athlete, Christiaan Greyling, ran the race of his life to place third, just two minutes behind Reilly and also inside the previous record.

But in spite of the trail theatrics from Lauenstein, the depth of talent in the women’s field always threatened to steal the show, and so it proved, with Stellenbosch adventure sport, canoeist and trail athlete, Robyn Owen (nee Kime), scoring a stunning record-breaking win over one of the finest trail athletes in the world, American Stevie Kremer.  Both athletes were Otter debutants.

And the myth of the weaker sex was finally buried with four women placing in the top ten overall in one of the toughest races on the planet. Johannesburg trail star, Nicolette Griffioen and the Cape Town pair, Meg Mackenzie and Katya Soggot, completed the top five.

It would be hard to imagine a more absorbing contest than that between Owen and Kremer, with the lead changing as often as the many ascents and descents that characterise South Africa’s most iconic hiking trail. Kremer was dominant on the climbs, with Owen holding sway on the descents and technically challenging stretches.

Together at the Bloukrans River crossing at 12km and Oakhurst hut at half way, the two were still neck and neck at the waterfall just 4 km from the finish. But with the race’s most technically difficult section over coastal rocks lying between the runners and the finish, little could stop Owen as she sped over slippery rocks at frightening speed to build a gap of almost three minutes on Kremer to snatch a memorable victory.

An Otter win within weeks after impressive performances in the Rhino Challenge trail race in the Drakensberg and the Fish River SA Canoe championships, appears to signal Owen’s affinity with animal species, and she finished 10 minutes ahead of the more-favoured veterinarian student, Nicolette Griffioen, who clocked an impressive 5:00:37 despite a “tough day in the office”.

Agonisingly close for Kremer, the loss compounded the agony of a badly sprained ankle at the Bloukrans crossing, a legacy of spirited decision by Owen and Kremer to do a “double act” down the compulsory slide into the river.

“We thought it would be fun, but we did not realise how shallow the river was,” explained a rueful Kremer. “And I just felt my ankle go.  Many times in the race I thought I would have to quit – it was really painful.  But what an incredible race this is, the beauty is just astounding.”

Just two weeks before leaving with the South African Painted Wolf team to participate in the world adventure sport championships in Australia, Owen’s status as an extraordinary trail athlete has been confirmed and the five times Dusi Canoe winner seemingly has the world at her feet.

“It was the hardest race of my life,” admitted Owen. “I never thought I could sustain the level of intensity to stay the pace up front. I decided to go for broke and stay with Stevie to Bloukrans.  Then to Oakhurst and half way.  I somehow managed to stay in contact in the second half  – she would power past on the ascents but I would come back on the down-hills.

“Finally we arrived at the waterfall together and I felt I had a chance over the rocks.  But it was such a privilege to run with an athlete of Stevie’s stature. She has achieved so much that we can hardly even dream about.”

As always gracious in victory, Lauenstein paid tribute to his rivals and the race organisers. “It’s such an incredible race – unique in so many ways. I think that the world’s best-known athletes, such as Kilian Jornet, would want to run the Otter.  And Kane (Reilly) is really talented and in his early 20s has a big future in the sport.”

Lauenstein set a fast pace from the start, but was closely pursued by Reilly and Otter prologue winner, Thabang Madiba, who reached the Bloukrans crossing less than a minute behind the leader.  Lauenstein maintained his pace, but Reilly kept in touch, less than three minutes down at the half way at Oakhurst.

“I went through a bad patch shortly after half way for about 10km and Marc vanished into the distance,” said Reilly.  “I suspected Christiaan (Greyling) would be closing on me, but fortunately I recovered and finished the last quarter quite strongly.”

Greyling indeed closed rapidly, after a conservative start, but ran out of kilometres and had to settle for third, delighted to exactly achieve his pre-race goal time.