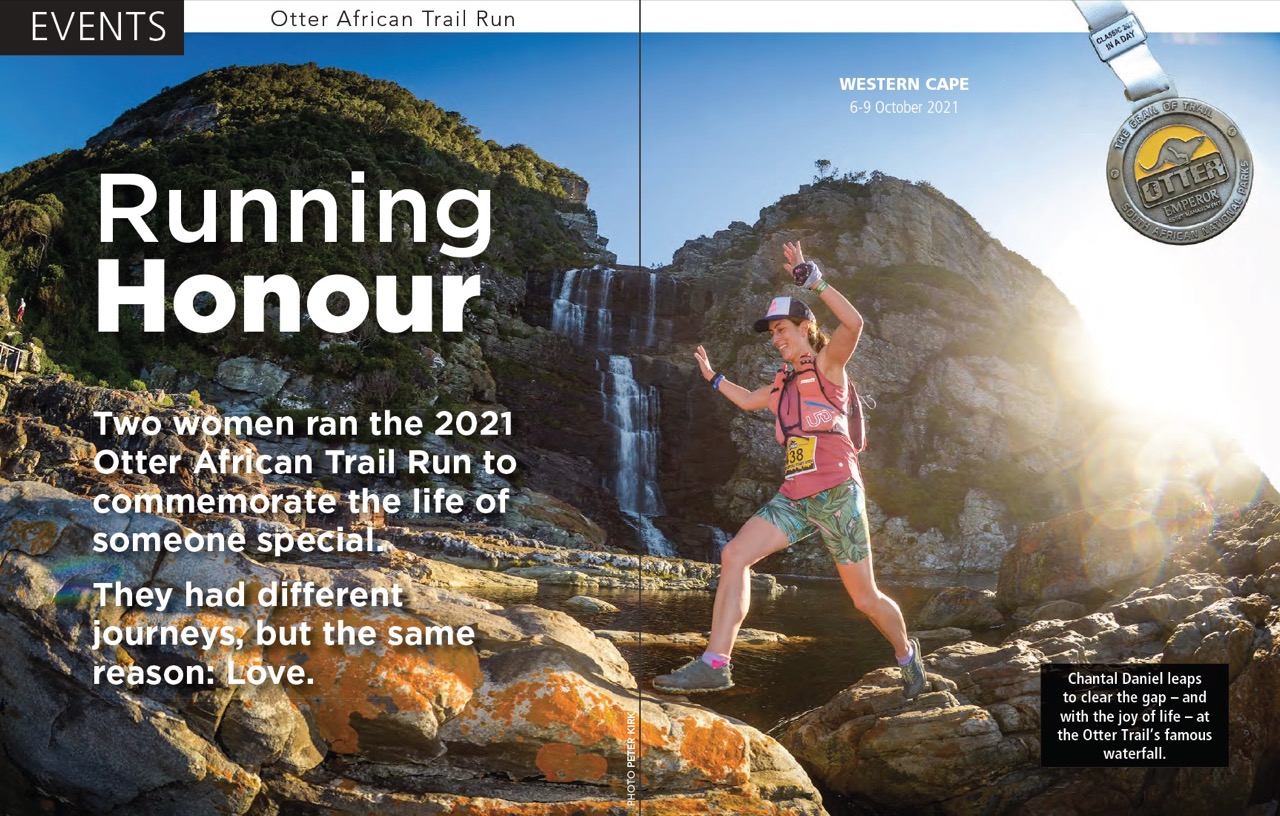 Two women ran the 2021 Otter African Trail Run to commemorate the life of someone special in their lives. They had different journeys, but for the same reason: Love.

Trail running was one of Werner Daniel’s passions. Then one day he went on a training run and didn’t return. To his loving family and friends, he’d been stolen from them. Five months later, his wife Chantal took on an epic challenge to make sense of his death and to celebrate his life. Her friend Tracey Randle tells the story.

The speakers were pumping high octane music with words you couldn’t make out. The race commentator was enthusiastically blasting out: “Congratulations on what you have undertaken to get here, over the last year, the last two years… the Grail of Trail 2021!”.

Out on the water, Chantal Daniel was striding across the last obstacle for runners, a floating bridge on the lagoon. It floats – but only just. Runners need to keep moving or else the panels sink into the water.
Then she approached the notorious balance beam, a six-metre long beam only 10cm wide. Almost everyone who tried crossing it earlier failed and had fallen into the bracing waters of Nature’s Valley lagoon. Her family and friends were screaming at her from the finish line, “Come on Chans!”.
She looked up apprehensively for a second and then dove into the refreshing brackish water. She swam the short distance and pulled herself out, back onto the floating platform on the other side.
A whisper away from the Otter Challenge finish line, did the commentator know what she had gone through to get to this point? It was not just the 42km of running, known to be one of the most beautiful but gruelling trail marathons in South Africa.

Rather, it was what it had taken her personally to get to that point. It was a small miracle that she made it this far. Was she the women’s winner of the Otter Challenge? Yes, perhaps she was.

Only five months previously, on Freedom Day, Chantal had attended the emotional memorial service of her beloved husband Werner. The Kelvin Grove Club ballroom was packed with his tribe: trail runners, surfers, friends, colleagues, and family.
Chantal and their six-year-old twins were held close by a small circle of close relatives. The massive outpouring of grief and dedication made it abundantly clear that he was someone special.
A few days before, on 17 April 2021, Werner’s heart had stopped beating while he was running in Newlands Forest. He was with a doctor friend who, with a team of paramedics, tried for two hours to resuscitate him. His heart never beat again.
He’d had a cardiac arrest linked to hereditary factors. He had no warning signs, ate very healthily, meditated, and exercised.
This was not how it was meant to be, surely least of all to a true friend, a devoted husband, a dedicated father. He was just 39 years old.

Anyone who had spent even just a small amount of time in his company got a sense of who he was – incredibly interested in listening to what you had to say, enthusiastic about the simple things in life, open to different perspectives, and passionate about everything he did.
Many of those attending the service had met him on the trail. Despite being an ultrarunner with impressive achievements, he somehow made a newbie runner struggling on an easy trail feel like they were ultrarunners too. He was that type of guy.

An inkling of the strength Chantal is capable of was witnessed as she walked up to the podium in a flowing dress and spoke her love to him. She read it with her eyes on her children. She held it together through entire hurricanes of emotion that threaten to spill out of her. Her strength alone had all the mourners weeping into their hands. One of Werner’s closest friends who gave a dedication before her didn’t fare as well – it was all too much for him.

The next day, Chantal was told about his Otter entry sponsored by Wazoogles. Would she like it? “I needed time to think about it. I was very weak and had taken a physical knock from the grief and shock. My instinct was to say no, but I knew how special the trail is, and Werner had insisted I should do it in the future, so I thought I would just think about it before deciding.”

Werner had run the Retto version of the Otter (the reverse route) the year before and finished in an admirable time of 6:28, taking it – in his words – “super chilled” and sailing through on light feet like he always did.

Darkness descended as the weeks passed and the reality of Werner’s loss became more real. Chantal and the kids were blanketed away to Greyton with her family at the start of May. She went out into the mountains on her own where they always walked and ran together, even when the twins were toddlers.
Sitting on a bench overlooking all their memories, finding him in the spider webs and the sunbirds he loved, she decided to do the Otter. She had just five months to train for a race that many people take two years preparing for. She had been a widow for less than a month.

Unlike Wern, Chantal was not an ultrarunner. The most she had run was a two-day Trail Girl weekend in Wilderness that March. The Otter was going to be a monumental push. How on earth was she going to do it? Not many believed she could, or perhaps even that she should. She was emotionally compromised, maybe not thinking straight in all her grief and holding onto her life by a thin thread for the sake of her children feeling that the floor had fallen out beneath her.

So how would she get to the finish line, or even to the start for that matter? Her rookie trail crew of midlife mothers put together a programme of short runs during the week and long runs over the weekend. In all honesty, they had no idea what they were doing. So Chantal and a few friends started a newbie trail group towards the end of 2019, inspired by Werner’s love for trail running.
While trail running is often seen as a hardcore sport, these newbies were in it for the fun, the scenery, the snacks, and the photos. That group became Forest Friends, a start-up collective of runners that have over 130 people on its WhatsApp daily runs group – and growing.
It turns out that many newbies have been too intimidated to try the trial. The pandemic became the tipping point, as Capetonians sought hiking and running the mountains as a place of refuge in the worst of times.

Which is perhaps what Chantal had chosen too: to run in the absolute worst time of her life. Her body and mind felt like they had been hit by a bus. Whatever running strength she had built up had been washed away by grief. She started by walking and running parts of her Forest Friends loop in Newlands Forest after she dropped the kids off at school. It took nearly 90 minutes to do less than 7km. She did it almost every second-day in-between strength training and walks with the twins in the forest.
In the forest, Chantal would often run on the path where Werner lived his final moments. She also walked there with her family to place flowers at the peaceful bend in the trees.

Read and see TRAIL 42 for the full account. https://trailmag.co.za/read/